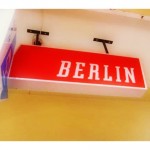 No, not the place where JFK proudly proclaimed he was a jelly doughnut (remember his “Ich bin ein Berliner!” speech?), the other place that was on 7th street Melville, cramped right between Stripes on 7th and The Loft.

The blue, white and red sign enticingly glowing, welcoming you with promise that you had found the right bar. During the day, it was emptier than most European churches – those that aren’t yet turned into museums – and at night, especially Thursdays and Sundays , it got so full that most of the party happened outside this establishment – because it was small and cramped up and sweaty – but not the old fried onion kind of smell. These nights were wittily named Detox Thursdays and Sundays. Where a couple of slogans like “Sunday is the new Friday”  and “retox is the new detox” came about and put shame to all other phuza Thursday’s around the country

It was young, vibrant, fresh *but aren’t all bars in Jo’burg like that? – Try* and the only place that played a bloody good range of hip-hop– which appealed to some house heads and hip-hop enthusiasts alike, drinks were cheaper than most places around Melville and they even sold Cheas-Naks ( cheesier than Nik-Naks, IMO, which reminds me, when was the last time a person had those?) You’d know who was there by just looking at the windows but nevertheless you were guaranteed a great time;unless one of your mate’s prospects, or even yours, was not present).

…and to imagine that I fell in love with the place on a lark; this one Sunday night (2008) after convincing people with cars that the braai we were attending was dying down and that Melville 7th street was a better place to continue celebrating the end of examinations!

The interesting thing about this establishment was that after a while, one realised that the same “creative” types – and some others – frequent the place, creating a myriad of attractive yet dysfunctional relationships of any kind, a kind of non-septic cesspool – that’s what drew one there. The thing is, after a while, one becomes highly acquainted with the order of the DJ’s and their playlists – with the DJ adding a couple of new songs here and there – so the music became excessive and the reason why one continued to frequent the place was because of the people, yes, people. Human beings are social creatures and that just makes us all so curious, which makes us ponder and wonder about the next person’s life, especially when you see them all. The. Time. It’s in our DNA. Therefore, I did understand why one would be so drawn to such a state of affairs, it made for a piquant life :

– Who is doing whom now?

– Who is cheating on whom and with whom?

– Would there be any confrontations?

– Who was going to act crazy or out of character?

– Were there going to be any drunken brawls?

– And the classic, who was going to get themselves banned that night.

The post-detox chill session would then take place at some friends apartment where people had been pre-drinking earlier and the conversation would mostly comprise of everyones notes on the latter questions, laugh a bit, drink some more and patiently wait for the next detox night!

It was a way of life.

It was a distraction from the reality that is life but like all distractions,  it’s legacy still lives on but now there’s Kitchener’s (and Braam).

One thought on “BERLIN (Melville, JHB)”