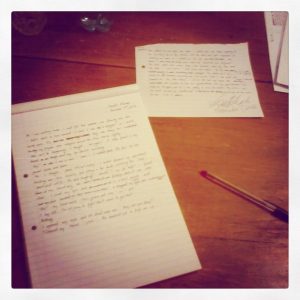 Not too long ago – actually, around a thousand tweets ago, which in the Twitterverse is a week or less – I tweeted something along the lines of the first post of any blog being probably the worst post of the blog, ever. Albeit, at that time my comment was directed at – or in Twitter terms “I was subtweeting – a blogger who… oh, never mind.

Nevertheless, I skimmed through as many first posts of the blogs running on the internet as I could, including my own blogspot blog (I don’t count my tumblr blog) and discovered that first posts do suck. With that in mind, and having recently signed up on www.ilikewhatiwrite.co.za, I sat for three days biting my nails, in between jotting down some “first post” ideas and calling my muse (who seems to be moonlighting elsewhere as a muse these days), looking for inspiration for an impressive first post which alas turned out to be a post of first posts.

How’s that for an impression?

First posts are that fashion-rookie who unfortunately wears more than two of the current season’s trends at once, that playground misfit who goes on about how they can get one all the cool stuff out there but never delivers or worse, that pimple that mushrooms on one’s face the night before *wait for it* a date! *gasp*. They can also be likened to one’s first time because people are always willing to give one a second try as there’ll be less nerves and one already has the rhythm of how things should go.

A number of bloggers would agree that first posts are the number one trigger for instant writer’s block – think about it, first there is that I-have-a-blog-rush then one is thinking “okay, what am I to write about?”, which results in a post that introduces the blogger and welcomes the reader to some sort of journey – through words, music, images, links, quotes and videos – that is their thoughts, opinions on various subjects, and life. Then, the blogger – in a tour-guide manner- shares a brief run-down of what to expect on this journey, which is impossible since one cannot tell how they will evolve.

As mush as bloggers try, there is no escape from the the first post trap. It’s a tried and tested formula, the audition piece, the awkward proclamation of one’s arrival to the bloggger-sphere that leaves one reading their own piece ad nauseum in search of that typo.

Being the proud owner of a very bad first post and after coming to a conclusion that one can only ever have one “first post”, I decided that I will get to that part:
I write and I like what I write. I’m also trying to bring the hyphen back.

*phew!* how’s that for escaping the first post trap?

Linguist and inhabitant of the inter-web.