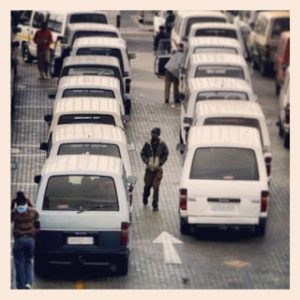 …those are the terms you usually hear in a taxi, here.
No, not a cab where it’s just you and the driver, the mini-bus ones that range from new Quantums to very old types which you cannot make out what make it is.

The taxi’s that most South Africans use as a primary mode of transport, the ones that went on strike after the announcement of the Gautrain and BRT.

The taxi’s whose violence is legendary.

Those that drive bad and stop almost anywhere without warning because the passengers tell the driver to stop there.

The ones with the passengers that stare at every passing car and won’t open the windows on a rainy day and it smells like freshly relaxed or permed hair.

The taxi where the person next to the window has smelly feet and refuses to open a window.

The ones where if you’re sitting in the front you’re forced to count everyone’s fare even if you aren’t too sure about it yourself.

The taxi’s that know their way around rush-hour traffic.

Yeah, the ones with the drivers from hell!

I usually sit in the front to avoid having to shout out any of the commands to indicate my stop, but, if I’m unfortunate I usually sit at the back and pray and hope that someone is getting off where I need to get off.

In my experience of taxis, I’ve rarely seen the drivers as most people say they are, except in the case of the woman whose R50 got ripped because the driver didn’t have change. The last few times I’ve been in a taxi, the one driver tried to sell me Golden products, the other lectured me about how important it is to stay in school, another tried to sell me airtime and most of them are rather helpful.

The worst thing about taking a taxi is sitting next to someone who feels like they have to tell you their life story! And they won’t shut up! You can’t tell them to stop since they’re pouring their heart out and you become the joke of the rest of the passengers and they snigger because they understand how you feel after a long day.

But for all bad taxi experiences, there’s always a funny one that makes you take a taxi again so one can have a story to tell, because after all, don’t we live to tell stories?

Unfortunately, this didn’t happen to me nor  Coin  or Try but to *dramatic music* Sang.

She decided to take a taxi from work – since her lift club left her behind as she took too long to pack up her belongings. So, at that time of the day, her only option was the comforts of the aforesaid taxi’s – although she had hoped that one of the new ones would come by first, but instead it was a jalopy. She gave her signal and it stopped. She climbed in and saw that the only available seat was next to the slide door that didn’t close properly and left a gap so she had a lovely view of the tarmac at the step. Now, Sang, being who she is, was probably being harassed by Coin to “get back to chat”, which she did once the vehicle drove off. It drove in a manner that vehicles of its type do, swerving and driving on the yellow line until it did a rather interesting manoeuvre that left the passengers swaying and Sang’s delicate fingers lost grip of her shiny mobile which fell on the step and tumbled down through the gap it went.

Unlike her reclusive friend, who would have looked up and mumbled “oh!” and anticipated that another passenger saw what had happened and stopped the taxi. Sang shouted “Stop the taxi!” and like a Tom Cruise (or even Will Smith, these days) in a traffic scene, she opened the door with great force, jumped out and dodged the on-coming traffic while running in heels, to get her precious cellphone which was at the mouth of a drain. She took a deep breath and picked it up and saw it was still on Yeigo with ten “oi’s” from Coin and told her the story.

For those who haven’t been in a taxi, what are you waiting for? BRT and Gautrain are coming, taxi days are numbered… or not!

4 thoughts on “Sho’t Left | After Roboto”