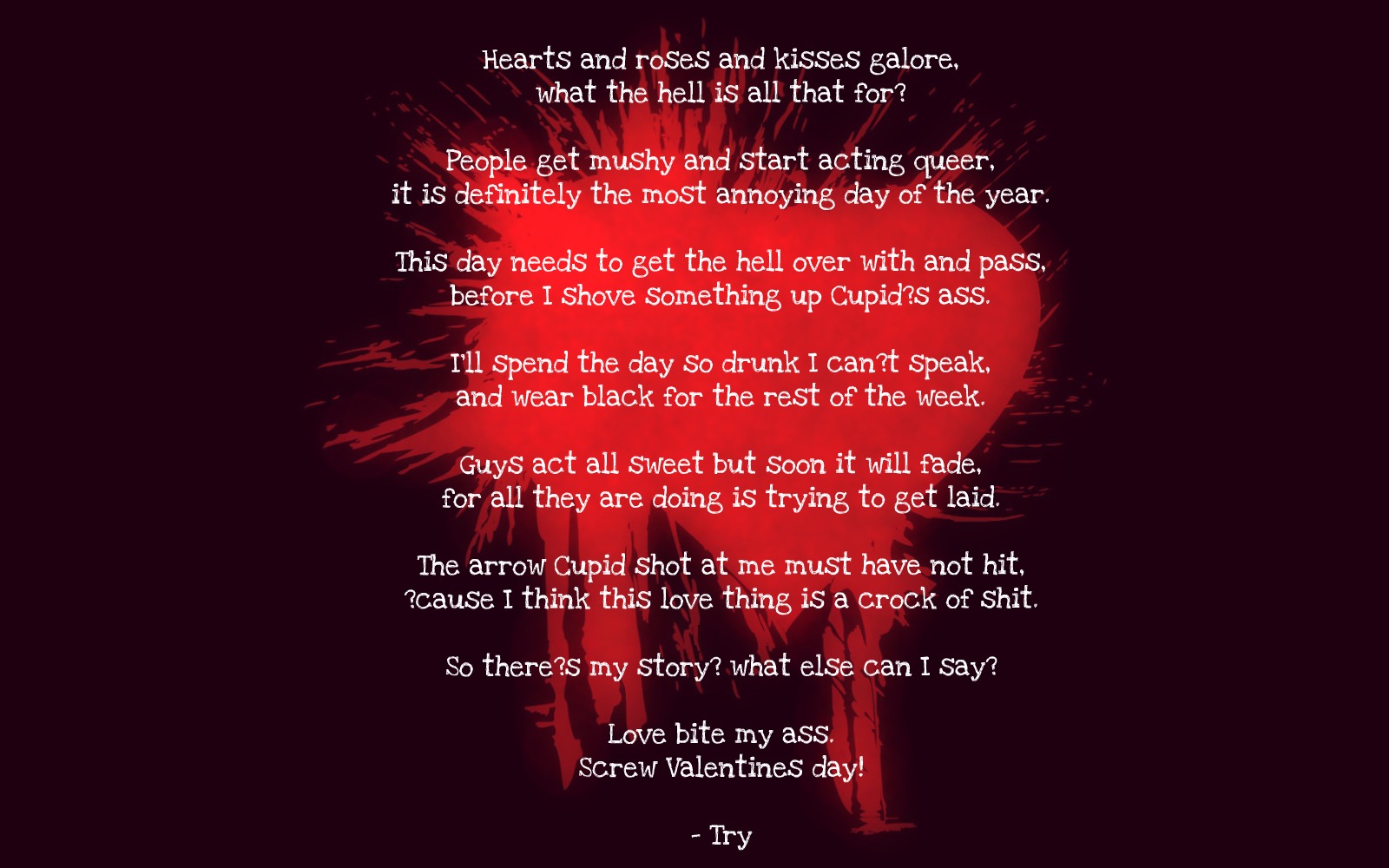 South Africa, one of the few countries in the world with a directional name and yet I still meet the odd person who dares to ask where in the world “south Africa” is.  Land of so many interesting things that I’ll leave for you to go Google later. My favourite thing about the country is how one can go to any of its metropolitan areas and at the end of the day feel as though you’ve experienced two different worlds thanks to it’s cultural diversity. See, here there is no “average Joe” there’s an average [insert race/origin/social status] Joe. Which brings me to the “café”. Anywhere else in the world, a café refers to an informal eatery that offers a range of hot meals and sandwiches or an establishment that specialises in serving coffee, because technically café is Euro-speak for coffee, which makes sense.

Wait until you come to South Africa, where the average Joe could point you one of two places: 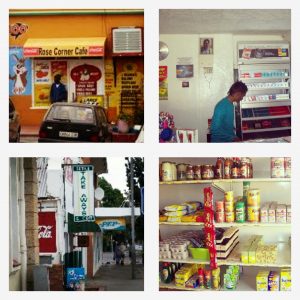 1. The Corner Café : an establishment that can be found – yep you guessed it – at the corner of any street and has nothing to do with serving coffee and hot meals, unless one counts the varieties of meals these places make with a type of sausage South Africans simply call “Russian” (post on this to come) and fries. These establishments are a cross between a small convenience store – the only convenience being it’s proximity to one’s abode – and general trader that sell miniature over-priced goods and the only coffee one will find there is in a tin and is either percolated or chicory. These establishments are identifiable by the signs outside which are sponsored by either a mobile network company or a soda company. 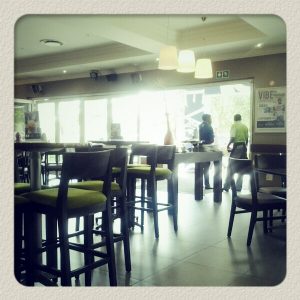 2. The franchise café: This establishment is known for it’s food but mostly for it’s cocktails (and cocktail specials), alcoholic beverage launches and alcoholic beverage sponsored parties complete with DJ’s and promo-gals. These places magically turn from a a semi-respectable breakfast meeting place to bar-type place by day, to a full club by night. Yes, there’s coffee but who drinks it when the waitress can slip you a cold one at 9am with your Eggs Benedict. These establishments are the hunting grounds of BEE-type characters (BEE – black economic empowerment, l-o-n-g story but basically proves that South Africa still has a long way to go) who sit with laptops, playing Solitaire, looking like they’re busy on a “deal” or talk to themselves on the phone – and forget to switch to “silent profile” because they look silly when the phone starts ringing “mid-conversation”.

If you’re looking for that cosy place with the smell of coffee in the air and real good croissants and pastries , you know that type of place one would expect to see Hemmingway, Wilde, Van Gogh and even Sartre sipping on coffee and smoking a cigarette, you’re going to have to be specific when speaking to the average South African Joe and ask for a coffee shop. If they don’t get it, ask for a directory or look in your traveller’s guide and any place that got something to do with coffee in it’s title is your best bet… just avoid NewsCafe. 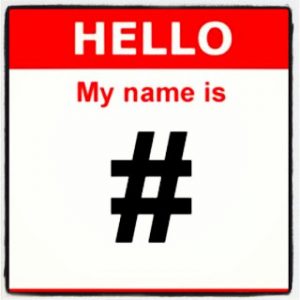 There’s this one clumsy error that occurs: when a man allows his mind to wander, provided his visuals are alluring, and should he entertain these thoughts long enough, blood subsequently drains from his brain and engorges his nether regions. That process was the bane of my adolescent life, especially Math with the bosomy  Miss Harpin . This one cursed day, she called me up to the board to complete a sum – which I actually had the answer to – and just as I was about to get up I realised I had the biggest boner ever! I tried sticking my hand in my pocket, to tuck it into my boxers – a rather futile attempt to avoid embarrassment – but that one touch had me coming in my pants. Needless to say, since that day I learnt to control it and never have a public boner again. Ah-huh… a boner aka woody, hard

-on -call it what you may – it’s awkward! Unless you’re Ava, who still maintains it means “a crush on a trombone player” *shakes head*

Which brings me to this –&gt; # – the hash *no not that kind!* or hash tag… originally used as a simpler of writing the pound symbol, because let’s face it, “£” is pretty hard to pen, especially in a hurry; it’s also used as a symbol for number and in IT-land it’s used for metadata, which is a way of grouping information related to a keyword or term to be found by browsing or searching when required. Hashtag friendly social networks like Instagram, Twitter and tumblr (to name a few) use it just the same and as for Facebookers *cough* there’s a reason children in schools are being taught the phrase “as useless as a hashtag on Facebook” as part of the comparative.

… now combine the two, “hashtag” being the modifier and “boner” being the head of the compound, and you get an Information Age pandemic!

I noticed this in March, around the time Coin and Ava realised that Goop was and still is the word, just before their first “electronic shutdown” meditation hour. They handed me their mobile devices – as they are wholly incapable of turning them off – killed the mains, which meant no TV, radio or pc. So, I headed to the nearest pub and scrolled through the social network feeds and discovered they were abuzz with #… what Josh describes as “the battlecry to hipsters”.

I decided to join a table of three hipster-looking people and got their opinions on hash-tags on four popular social networks:

Fifher “Like make it stop, already! I swear this over tagging is caused by FOMO or something!”

Fifher “Few are useful, some are funny but most are just marketing douchebaggery”

On Tumblr: Nomsa “at least like they’re only visible on the dashboard and like at the bottom in tiny writing and not in your face?”

Angela: “I’ve seen them, but what are they for?”

Fifher: “people on Fb have no business using a hashtag unless it’s succeeded by a numeral and they intend to say ‘number one’ or something.”

… straight from the hipsters.

With that in mind, I came up with a definition for “hash-tag boner” :

1. when an obscene amount of hash-tags are allotted to a single post

2. a way to ruin a perfectly good picture on Instagram

e.g Coin had this super cute pic of a gooseberry up but her hash-tag boner totes killed it OR Fifher’s constant hash-tag boner is seriously like so newbie.

From my experience with boners,  they’re best kept hidden otherwise they’re awkward and if one must, stick to three, since well… omne trium perfectum *hahaha*. Really, no one wants to be remembered for having a public boner.

Trust me, I still bear the emotional scars.